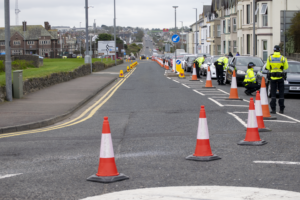 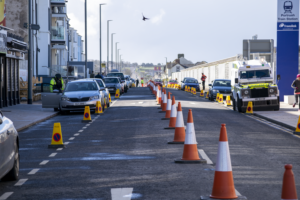 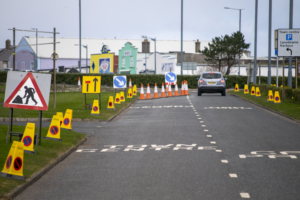 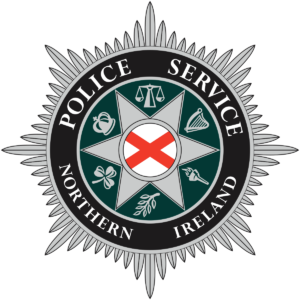 Traditionally each Easter weekend, thousands of vehicles descend on the Portrush peninsula & north coast for unofficial car meet ups which are ad hoc and not formally organised. This can cause significant disruption to families attending the town for tourism & leisure as well as the residents and businesses themselves.

Historically when it has not been managed, the Emergency Services have been delayed getting to emergencies where people are in danger due to the long tailbacks on approach roads and lack of passing points on the narrow roads.

We were tasked with creating a Traffic Management Plan that incorporated the requirements from the PSNI Event Planning & Traffic Management team but also gave them the flexibility to reactively respond to emergencies and unexpected traffic problems on each day of the Easter weekend.

Working with the original Police Traffic Management Plan we proposed a variety of Traffic Management systems which could be used in phases depending on which approach road into the area was building up and where the traffic was being routed to. This plan also included fail-safe measures in the event of a major incident or issue such as roads becoming blocked, with a large amount of strategic Road Closures, Lane Closures and Roundabout closures dropped outside of the core footprint to enable quick deployment if needed. The aim was that implementation of these would be controlled by the Police Siver Commander and implemented by our mobile teams as needed

Indeed, on the first day of deployment as our Traffic Management Operatives were placing equipment a Road Traffic Collision occurred on the main single lane approach road into the town’s one way system. This occurred well before the main Police deployment, so our team worked with the Police Control Room to close this road and re-direct traffic away from the incident. This enabled the Police to expedite recovery of the vehicles and re-open the road before the thousands of vehicles arrived, receiving significant praise for the team from the Silver Commander on duty.

Our Traffic Management Operatives remained on the road network all day working under the authority of the Silver & Bronze Commanders and Traffic Management Officer. This included responding to incidents across the north coast including the next town along, Portstewart.

This evolving Traffic Management deployment process enabled measures to be put in place to keep traffic constantly flowing in the area and provided the many emergency services vehicles on blue light runs with clear paths into and out of the area.

In the evenings, the team were scheduled to finish at 1900 but the Silver Commander requested they remain on shift until late into the evening due to how effective they had been on the ground in both managing the traffic and freeing up Police Officers who historically had to perform this role.